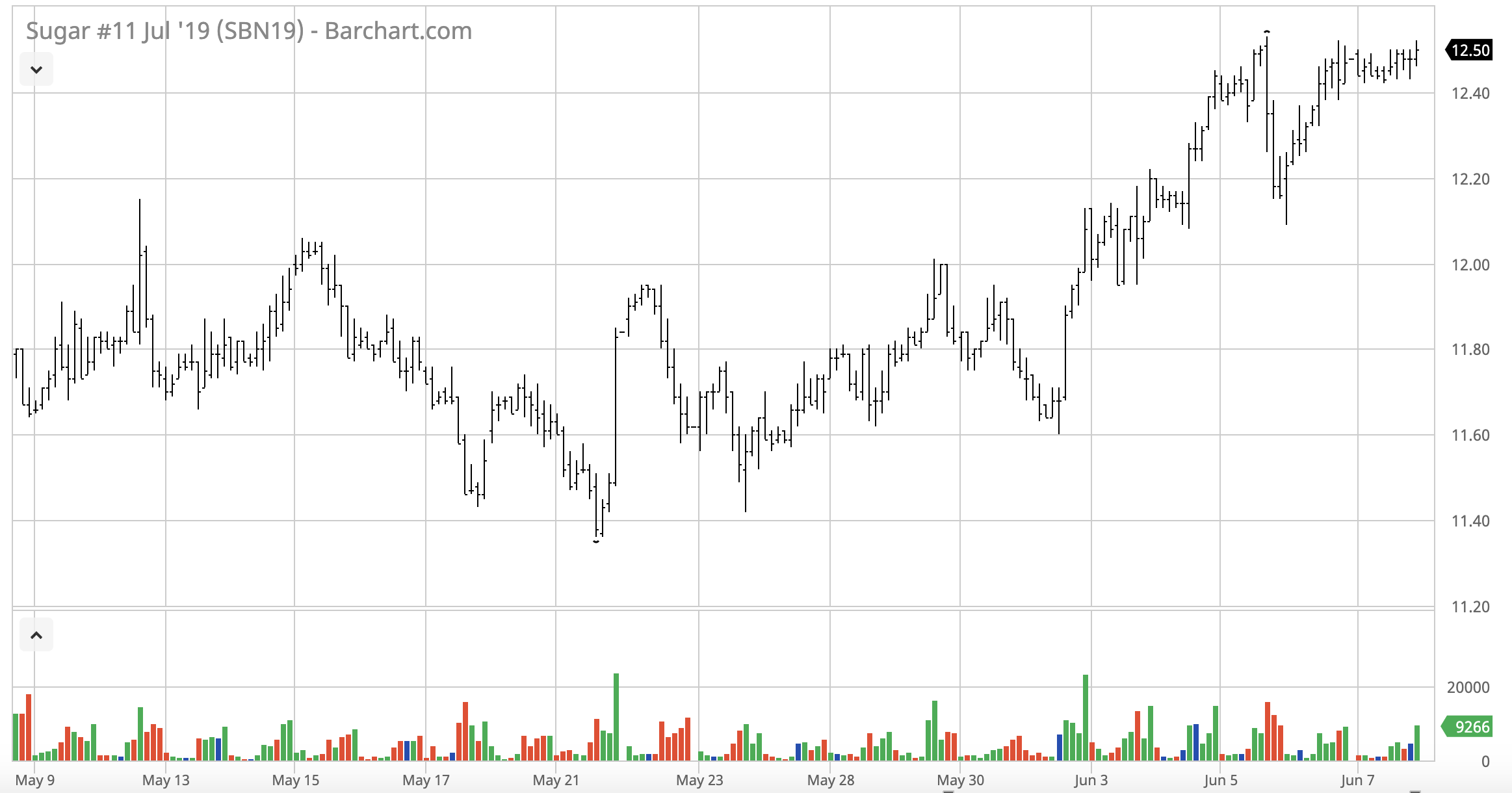 Following a six month low in late May, July ICE Sugar has recovered to the mid 12c range, and the primary indicator for the short term behavior will likely be dictated as much by precipitation across Southeast Asia and the Indian subcontinent as it is by the strength of the Brazilian real.  In the May USDA Foreign Agriculture Service Sugar Market & Trade Report, global production estimates for the 2019/20 Marketing Year were reported up only ~2mmt from the previous campaign. Estimated gains in supply from Brazil are countered by shorter crops in India, Pakistan and Thailand (with India showing the largest production decline across the majors).  While most forward estimates for Brazil production seem to agree on a strong year, there are questions about 19/20 Indian output.  Monsoon onset is delayed this year, and while that does not necessarily translate to a poor crop, it is a factor that we can look at as a potential yield inhibitor early in the season, particularly with respect to relative growing conditions in southern districts.  Convective flow in the southern Bay of Bengal has been picking up in recent days, and stratospheric heights look conducive for an active pattern over the next week.  Despite the favorable short term forecast, consistent moisture patterns are still roughly a week behind anticipated milestones; market reactions reflected by recent price activity.   It will be worth monitoring changes in weekly net-long positions as reported in the weekly CFTC Commitments of Traders reports in the coming weeks.

Another theme worth monitoring is the importance this year in Asian/Asia Pacific production.  In years where the global surplus in physical stocks is healthy (> 5mmt), offtake in any one country is usually made up by strong numbers from another origin.  But as we move through the 2019/20 year and surplus estimates are all hovering around +2mmt, revisions across regions can lead to a much more dramatic market reaction.  A 2mmt buffer might sound like decent insurance against potential crop losses, but a surplus of that size can be erased in a matter of weeks if weather does not cooperate during critical stages in the sugarcane growing cycle.  When we look at potential reductions in India’s crop that are at least in part related to the annual Monsoon, this same pattern exhibits teleconnections which affect growing conditions in major origins including Pakistan, South China, Indonesia, Thailand and Australia.  The significance of Asian supply, and demand (& transport), will emerge as a defining component of not only the global sugar trade but the entire global agriculture trade in the decades to come.  Parag Khanna and I discuss this changing dynamic as governed by China’s Belt & Road Initiative in a series of essays published by Knowledge@Wharton.  Part 1 discusses what might be expected as new trade routes (re)open and new and old trading partners engage in physical transactions; Part 2 (forthcoming) will go deeper into the potential risks and opportunities across the global agricultural value chain.